I believe that one of the most important extra-curricula skills that young people should leave school with is an EMPOWERING and POSITIVE relationship with technology.

Young people are struggling to cope with the constant contact that technology brings at a time when it’s:

– In the form of a hand-held device

– Goes in your pocket

– Needs to be physically picked up to be engaged with

Take a moment to consider where we are on the graph. Things are going to be changing fast. 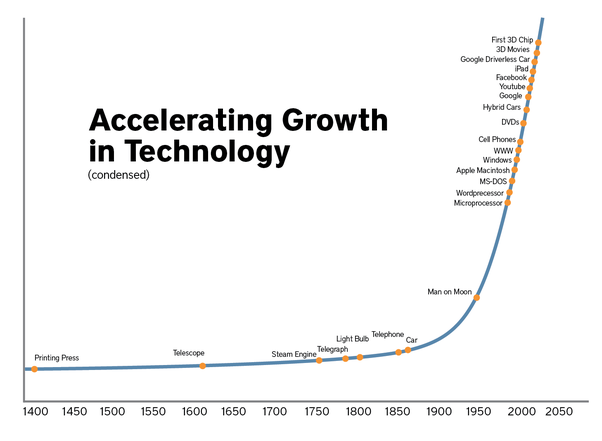 Author Yuval Noah Harari, in his books Homo Deus and 21 Lessons for the 21st Century talks about the merging of Biotech and Infotech which are both well worth a read. In this recent interview with him in The Guardian he touches upon the topic.

I feel it’s really important to understand that, by the time the young people of today get to the work place, it’s highly likely that switching off won’t be as easy as putting your phone on aeroplane mode or putting it in your pocket.

If young people can leave school with a positive relationship with technology via their phone, rather than an addiction, then hopefully they will be able to cope with the next wave.